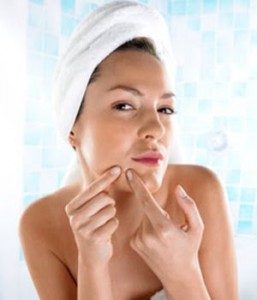 Acne is a disease state in which skin cells that line a hair or sebaceous follicle are shed, but fail they to make it to the surface of the skin to be sloughed away. An acne lesion begins when sebum (oil) causes skin cells to stick together and clog a follicle. When oil and dead skin cells collect in the follicle, bacteria quickly multiplies, specifically Propionbacterium (P.acne bacteria). The bacteria causes the release of free fatty acids, which irritate the follicle and cause inflammation. 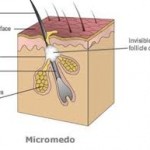 Micro-comedones
A non- inflammatory, very tiny hard blockage under the skin. It is the smallest acne lesion and is not visible at the skins surface. This is the beginning stage of a blocked follicle. Micro-comedones develop into open or closed comedones as trapped sebum (oil) increases. 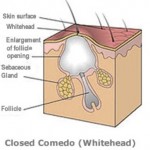 Closed Comedones (Whiteheads or Milia)
A small non- inflammatory bump at the surface of the skin. Dead skin cells and oil become trapped inside the follicle, and the opening to the follicle is closed. 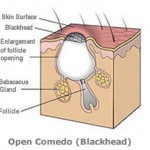 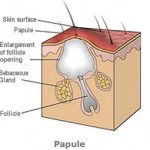 Pustules
An inflamed, pus filled acne lesion. Pustules are what are commonly called pimples and the white or yellow center is often called a “head”. A pustule is surrounded by a circle of red inflamed skin. 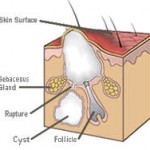 Nodules & Cysts
Nodules and cysts are large inflamed acne lesions that develop deep within the skin. They are severe forms of acne that often cause scars. You should never attempt to pop or extract cyst or nodules, they need to be treated medically.

Nodule
A large, solid, inflamed, pus- filled lesion that is located deep within the skin. A nodule will feel firm because the puss hardens inside the lesion. The body’s immune system responds by trying to keep the bacteria from spreading and skin cells will grow or wrap around the follicle. Nodules are often referred to as cysts.
Cyst
A large, soft, inflamed sac -like lesion that is located deep within the skin. Cysts are filled with fluid or a semi-fluid that consists of white blood cells, dead skin cells, and bacteria.

The main objectives in treating acne are to reduce oil production, bacteria, inflammation and to alter keritinization (build up of skin cells). The exact treatment will depend largely on the degree of acne being treated. The treatment for acne will depend on the grade or severity of the condition.

Sebum (oil) production
Those prone to acne often produce excessive amounts of sebum (oil). When there is an increase in Androgen hormones such as testosterone, the oil glands become larger and produce more sebum (oil)

Bacteria
Some bacteria is normally present on the skin, including P. acne bacteria (Propionibacterium acnes). There is an increased level of bacteria in acne. Bacteria thrives in an eviroment that is deprived of oxygen so products that intoduce oxygen into the skin work to fight bacteria, this includes benzoyl peroxide. The use of oral antibiotics for acne is usually only recomended for short term use because the body can become tolerant to antibiotics. It is also believed that long term use of oral antibiotics contributes to acne cysts.

– Salicylic Acid: Topical salicylic acid treats acne by reducing swelling and redness
– Nicomide: A member of the Vitamin B family, also used for rosacea. Topical version available over the counter.
– Zink Oxide: Look for sunblock and mineral makeup with zinc oxide, it has anti-inflammatory properties in addition to being a physical UVA/ UVB
- Croyo-Slushy: anti-bacterial, anti-inflamatory and mild exfoliation properties

Corecting acne scars can be very challanging and expensive, you are always better off treating and controlling acne thus preventing acne scars. Acne cysts are most likely to cause scars, a diluted corticosteroid injection can be used to reduce cysts and inflammation.

Post Inflammatory Hyper-pigmentation (PIH) is name used for the dark spots left by acne or other skin lesions. The skin responds to inflammation by stimulating the melanocyte to over produce pigment cells. PIH can be prevented, treated and controlled with the use of topical products like hydroquinone and tretinoin. Topical Hydroquinone 4% is a prescription strength cream used to “suppress” the melanocyte which can help to prevent PIH and treat existing hyper pigmentation.

Depressed and ice pick scars are usually treated with a “leveling treatment” such as laser resurfacing or a deep chemical peel like the Obagi Blue Peel. Injectable fillers are also used to plump skin and reduce acne scars. Combining a leveling treatment with fillers will provide better results. As the skin ages, the loss of elasticity and collagen will cause acne scars to look worse. Anti-aging treatments and good sun protection can help slow this process. A facelift will also improve the appearance of acne scars because it tightens the skin.

Before you start an acne treatment

Many of the treatments and products mentioned in this post are prescription strength drugs or medical treatments. There are contraindications for some acne treatments, so it is important to consult with your doctor or skin health professional before starting an acne treatment program. Woman that are pregnant or nursing need to consult with their doctor before using ANY acne treatments, as many are not approved for use in pregnant or nursing women. The content provide in this post is intended to be informative and does not replace medical or professional treatment.