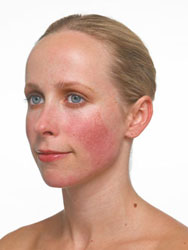 Rosacea is a vascular disorder that affects facial skin and eyes, causing facial redness, inflammation, broken blood vessels and red bumps known as inflammatory papules. Rosacea is a progressive disorder beginning with mild symptoms, and if left untreated can become severe. Rosacea treatment should begin as soon as possible to slow the progression, with an emphasis on treating the underlying vascular disorder. With continued treatment and avoidance of rosacea triggers, suffers can control their symptoms and slow or prevent further progression.

This post is intended for informational purposes only. Only a Doctor can diagnose rosacea, if you suspect you have rosacea you should consult with a physician, as facial flushing can be a sign of other systemic disorders. If you do have rosacea it is a good idea to begin a rosacea diary to track your specific triggers. Begin treatment as soon as possible to control your rosacea and do your best to avoid triggers.

Rosacea Stages: The progressing of symptoms

Pre-rosacea is characterized by frequent, temporary bouts of flushing and blushing. Facial redness disappears immediately after the trigger is over.

Mild rosacea is characterized by flushing and redness that lasts for an abnormally long time after trigger is over (half hour or more). Broken blood vessels (telangiectasia) may be present and skin may be sensitive to products.

Moderate rosacea is characterized by facial redness that last days or even weeks. The nose and cheeks may have a semi-permanent redness, causing a sunburned appearance. Swelling, burning, broken blood vessels, and inflammatory papules may be present. Some people may experience eye symptoms such as irritation, dryness, crusting, sensitivity to light, swelling of the eyelids, and a feeling of a foreign body in the eye.

Severe rosacea is characterized by severe flushing, inflammation, burning and swelling. Inflammatory papuals, pustules and nodules may develop. Rosacea that progresses to this point can be painful. In some cases rhinophyma may develop, this is a bulbous enlargement of the nose.

Function and Structure of normal blood vessels in facial skin

Blood vessels deliver oxygen and nutrients to the skin, as well as remove waste generated from skin cells. It is important to understand that blood vessels help regulate internal body temperature. When the body internal tempeture is high, blood flow will increase through the vessel to release heat from at the skins surface.

The endothelial cells line the inside wall of blood vessels and release potent dilator substances. When these dilators are released they diffuse to the smooth muscles cells and cause the vascular muscle to relax or dilate. When the vessel dilates, blood flow to the skin increases causing flushing and redness.

Rosacea is primarily a facial vascular disorder in which blood vessels are functionally and structurally abnormal.

With rosacea there are functional changes that take place in vessels. The blood vessels in facial skin become hyper-responsive to internal and external stimuli. Vessels may dilate to a substance that normal blood vessels would not respond to. They may also dilate or open more widely than normal blood vessels, and stay open for an abnormally long time.

Although cold temperatures initially cause blood vessels to constrict, over an extended time the skin cells can become deprived from oxygen and nutrients, which can trigger the release of potent dilators. Flushing caused by cold temperatures are influenced by the how cold and for how long skin is exposed to the cold factor. For example cool air will cause less constriction than cold air and would not deprive skin of oxygen and nutrients in the same way cold air does. Cool air will not cause flushing, but cold air may.

Facial nerves play a major role in rosacea flushing. Many medical experts believe that rosacea is a neuro-vascular disorder, meaning that the facial nerves release dilators onto blood vessels which intern causes flushing.

Sympathetic nerves help regulate thermoregulatory flushing, this type of flushing helps reduce internal body temperature and serves to protect the brain from heat. If the internal body temperature is to high, the brain activates sympathetic nerves, which release neurotransmitter substances on to blood vessels, telling them to dilate and causing flushing.
Consumeing hot beverages and food, as well as exercise can activate sympathetic nerves. Even emotional stress, anger and embarrassment can trigger these nerves.

Parasympathetic nerves are partially responsible for flushing caused by certain foods, crying, facial movement, and even facial pain. It is important to note that even mild foods can cause flushing, and each person may find they respond to different triggers.

Sensory nerves release potent vascular dilators and are responsible for flushing caused by skin irritations, and environmental factors such as wind, heat and sun.

can penetrate the skin and activate sensory nerves, as well as creating heat in the skin causing facial flushing.