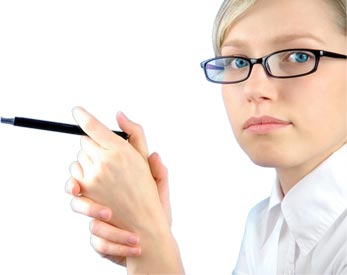 There are many variables involved in aesthetic lasers, including the active laser medium, wavelength, and targeted chromophore. Aesthetic lasers can be ablative, non-ablative or fractional. There are also other (non-laser) technology based treatments used in aesthetics such as Intense Pulsed Light (IPL) and Radio Frequency (RF).

The term “laser” originated as an acronym for Light Amplification by Stimulated Emission of Radiation. A laser generates a beam of very intense light. The light emitted by a laser is monochromatic, coherent and collimated.
Monochromatic – the light is of a single wavelength
Coherent - the light beam waves are in the same phase
Collimated - the light beams travel in parallel, all are parallel to each other.

The lasing medium is the source of optical gain within a laser. The Active Lasers Medium can be a solid crystal, liquid dye, gas, or semiconductors.

Solid State Lasers
Generally, the active medium of a solid-state laser consists of a glass or crystalline material.
Solid state lasers include Ruby, Aexandrite and Erbium.

Semiconductor
Semiconductor-based lasers are also in the solid state, but are considered as a separate class. Diode is a semiconductor based laser used in aesthetic treatments.

Dye Lasers
A dye laser is a laser which uses an organic dye as the lasing medium. A dye can usually be used for a much wider range of wavelengths which makes them suitable pulsed lasers. Pulsed Dye Lasers are used in aesthetic treatment. 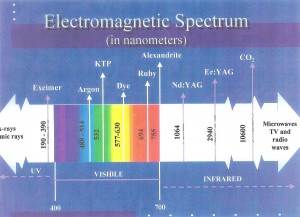 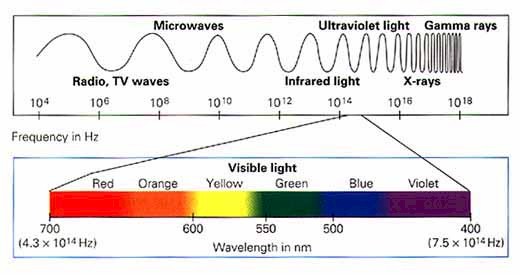 Electromagnetic spectrum is the range of all possible wavelengths and frequencies. Wavelength is the distance over which the wave’s shape repeats ( peak to peak).Wavelenghths are measured in micrometers (microns) and nanometers (nm) Frequency is the number of oscillations per second, measured in hertz.

Lasers used in aesthetic treatments target a specific chromophore generally melanin, hemoglobin or water in the tissue. The targeted chromophore is determined by the wavelength. The concentration of a specific chromophore peaks at different depths in the skin. For example hemoglobin in the blood is best absorbed at a shallow wavelength and water is best absorbed at deep wavelengths. Melanin is best absorbed somewhere in the middle (500nm-1064nm), the exact depth can vary, depending on the desired target. For example if you are targeting pigment in the hair follicle a deeper wavelength (640nm-1064nm) would be used, however most lasers used for hair removal are Diodes (800nm-900nm).

Melanin and hemoglobin in blood vessels have color that absorbs the light emitted by specific lasers. Lasers that target color are usually used for hair removal, treating vascular issues such as rosacea and broken blood vessels, and skin discolorations such as freckels. Tanning is contraindicated with laser treatments that target color, tan skin will absorb more heat, increasing the probability of a burn. Tanning can also interfer with the desired results of treatment, because there is less contrast between the intended target and the surrounding tissue. Lasers that are used for hair removal target the color in the hair, so grey or blond hair will not respond well. (There are some lasers that claim to treat grey or light hair).

Water constitutes 80% or more of soft tissue, so lasers that target water are generly used for resurfacing. Lasers with deep wavelenghts such as Co2 or erbium lasers are strongly absorbed by water. The Smoothbeam laser is a 1450nm diode laser that targets water in the skin and is used to treat acne by shrinking the oil gland.

Argon 488 and 515 nm, is a gas laser that emits a blue green light which is strongly absorbed by both hemoglobin and water,used for photocoagulation. Argon lasers are rarely used for aesthetic or dermatologic treatments.

KTP 532 nm, a brilliant green light well absorbed by hemoglobin and melanin used photoablation and photocoagulation. The Iredex DioLite 532 nm KTP that is Diode Pumped, it is used to treat vascular lesions and hyperpigmentation.

Pulsed Dye: 577 -585nm, a yellow light that is well absorbed by hemoglobin in blood. Pulsed Dye Lasers (PDL) are especially useful for the treatment of vascular lesions, including spider veins, strawberry birthmarks and port wine stains.

Ruby 694 nm, uses a synthetic ruby crystal that emits red light that is strongly absorbed by blue and black pigment, and by melanin in skin and hair.
Ruby lasers are used for laser hair removal, tattoo removal and treating pigmented lesions including freckles, liver spots.

Alexandrite Laser 755nm, emits a deep red light and is absorbed by melanin. Alexandrite permits deeper penetration into skin than the ruby, and is used for Laser Hair Reduction.

Diode 800-900nm, emit near-infrared light. Diodes in the 800-900 nm range are absorbed by melanin and used for laser hair removal. The Smoothbeam uses a diode with a 1450nm, it targets water in the skin and is used to treat acne and build collagen.

Nd:YAG 1064nm, laser emits a near infrared beam that can be absorbed by all tissue chromophores, however it is strongly absorbed by hemoglobin. Nd:YAG lasers are used for photocoagulation and photoablation, commonly used to treat broken blood vessels.

Er:YAG 2940nm, emits a mid-infrared beam which has an absorption peak for water. Its used is to ablate tissue for cosmetic laser resurfacing. Also known as Erbium.

CO2 10,600nm, is a gas laser emitting a mid infrared beam which is strongly absorbed by water. Co2 lasers are capable of cutting or vaporizing tissue, and are used for deep laser resurfacing.

Non-ablative lasers heat the layers of skin beneath the surface without removing the epidermis (top layer of skin).

Some of the lasers used in aesthetic treatments:

Sometimes a little information can be a dangerous thing.

This is intended to help provide some very basic information of cosmetic / aesthetic lasers. There are many factors involved with laser aesthetic treatments and not everything can be included in this post. Aesthetic laser treatments can be complicated and should only be performed by a qualified and experienced technician.

Thank you for visiting Best of Both Worlds Az.
You can follow us on Facebook, Twitter,Tumblr and on our blog site
www.bestofbothworldsaz.com 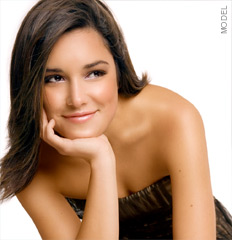 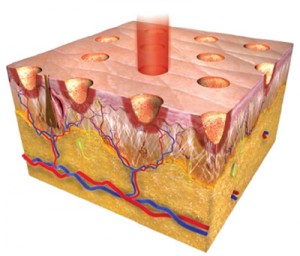