You are currently browsing the BestOfBothWorldsAZ.com blog archives for the day Tuesday, April 5th, 2016. 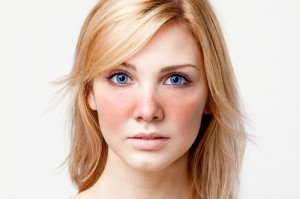 April has been designated as “Rosacea Awareness Month” by the National Rosacea Society (NRS). Rosacea is a progressive skin disorder commonly characterized by flushing and persistent redness on the central portion of the face and visible blood vessels. It has been estimated more than 16 million Americans are affected by Rosacea. The effects of Rosacea can go beyond this visible symptoms, often causing discomforts such as stinging and burning. For the majority of rosacea suffers it effects self esteem, going as far as to effect professional interactions.

Rosacea is a progressive skin disorder with symptoms including flushing, redness, visible blood vessels, burning, and stinging. Rosacea can also cause acne like symptoms, such as little bumps called papuals, often refereed to as Acne Rosacea. In more severe cases, there is a thickening of the skin and the nose can present as bulbous with irregular nodularities and enlargement, known as Rhinophyma. There is also a subtype of Roscacea, known as Ocular Rosacea, where eyes are red or bloodshot with burning and stinging. Rosacea is a progressive disorder and, left untreated, will worsen in severity with time. Those with Rosacea often experience flare-ups, which can last for months. Only a doctor can diagnose Rosacea. If you suspect you have Rosacea, see a dermatologist.

The exact cause of Rosacea is not completely understood. Suggested possibilities include auto-immune disease or defects in the nervous system which effects blood vessels or Demodex mites. It may be something there is a genetic predisposition to. What we do know is that there is a strong vascular component to Rosacea. We also know that there are “triggers” such as heat or spicy foods that can trigger flare-ups.

It is important to understand that there is not a cure for Rosacea, but it is something that can be treated to reduce severity and symptoms. First, those with Rosacea should work to understand what their specific triggers are. Avoiding triggers can reduce the frequency and severity of flare-ups. Finding skin care products that do not aggravate rosacea can be tricky. Consult with a Dermatologist and Esthetician for skin care recommendations appropriate for Rosacea skin.

Intense Pulse Light (IPL) remains the most effective treatment for addressing the redness and visible dilated blood vessels seen with Rosacea. Vascular lasers, such as a KTP or Yag, can be used to treat facial veins that are well visible and can be traced. Typically, 3-6 treatments are needed, scheduled about 3 weeks apart. Because there is no cure for Rosacea, a series of treatments may need to be repeated annually, depending on severity.

Botox injections have been shown to be effective when injected superficially in very dilute concentration to reduce the redness and flushing of Rosacea. Redness may be reduced for 3-6 months after injections. This treatment is currently considered “off-label”.

Facials will not correct any vascular component of Rosacea, but the appropriate facial can calm and sooth skin. Consult with your Esthetician Facialist for recommendations.